THIS NATIONAL APPRENTICESHIP WEEK WE ARE PROUD TO CELEBRATE THE 10TH ANNIVERSARY OF OUR APPRENTICE SPONSORSHIP SCHEME.

We started sponsoring apprentices in 2011 in response to the lack of options for local teenagers to develop skills and careers in the building trade.

Hudson pays a wage contribution of £50 per person per week for the first year of training with local employers and has sponsored more than 170 apprentices to date in Bridlington and Scarborough.

Success stories include Tom Benninger, a 26-year-old from Bridlington who is in the second year of his level 3 apprenticeship with Harrogate-based Martin & Gerard Electrical Contractors and Hull College.

Tom graduated from university with a sports coaching degree in 2015 but no clear career plan. He decided to pursue a higher skilled trade after stints at a golf club bar and kitchen extraction cleaning company.

Hull College singled out Tom for one of its Principal Awards last month in recognition of “effort and excellence”. Zailie Barratt, director of learner support services at the college, said: “We are very pleased Tom has been recognised for his outstanding efforts.”

The college praised his professionalism, politeness, attitude and ability to learn. “He understands just how important an apprenticeship is,” added a spokesperson.

Tom said: “During the first two years of the apprenticeship I have learned and developed a range of technical skills that have allowed me to start working safely and effectively within the industry.

“The support from Hudson Contract has greatly helped my growth and development in numerous ways: from helping me purchase good quality hand tools and power tools, to running my car which has enabled me to travel for work when I have been required to work independently.

“During the first wave of the coronavirus pandemic this became essential as vehicle sharing was restricted, and without the use of a car I would have been unable to work.

“The support has also helped me to continue to play sports and take part in hobbies outside of work including rugby, football, mountain biking, surfing and the gym.

“So far I have found my apprenticeship course enjoyable, engaging and challenging. To anyone considering an electrical apprenticeship course my advice to them would be to stay focused and approach the course ready to learn and willing to work hard. There is plenty of support and guidance provided from the college for students that wish to succeed.

“I feel that in my situation as a more mature apprentice that I made a positive career move in choosing to retrain. To anyone in a similar situation considering a career change I would highly recommend retraining through an apprenticeship programme.”

David Jackson, founder and chairman of Hudson Contract, said: “Well done to Tom and every young person who is making the most of our sponsorship scheme.

“Ten years ago, my wife Lesley and I came up with the idea of giving a young person a letter saying Hudson would cover half of their first year’s wages and encouraging them to find an apprenticeship.

“It is a very simplistic approach. Every month, if there is proof of continuance and college attendance and the invoice comes in, we pay it. No more bureaucracy than that.

“It is not easy creating new work opportunities in a seaside town. The trade skill you are giving them is for life. It is a good thing to commit to for your local community.

“I was born and brought up in Bridlington. The success that Hudson affords us allows our business to put a bit back into the local community.”
During National Apprenticeship Week (February 8-14), we are encouraging young people in our home town of Bridlington and neighbouring Scarborough to consider careers in the construction industry.

Martyn Price MBE, chairman of the Cross-industry Construction Apprenticeship Task Force, a membership group of which Hudson Contract is a member, said: “We applaud any and all efforts to increase meaningful apprenticeships in the construction industry.

“Now more than ever we must ensure young people have access to structured training.”

Ask us a question 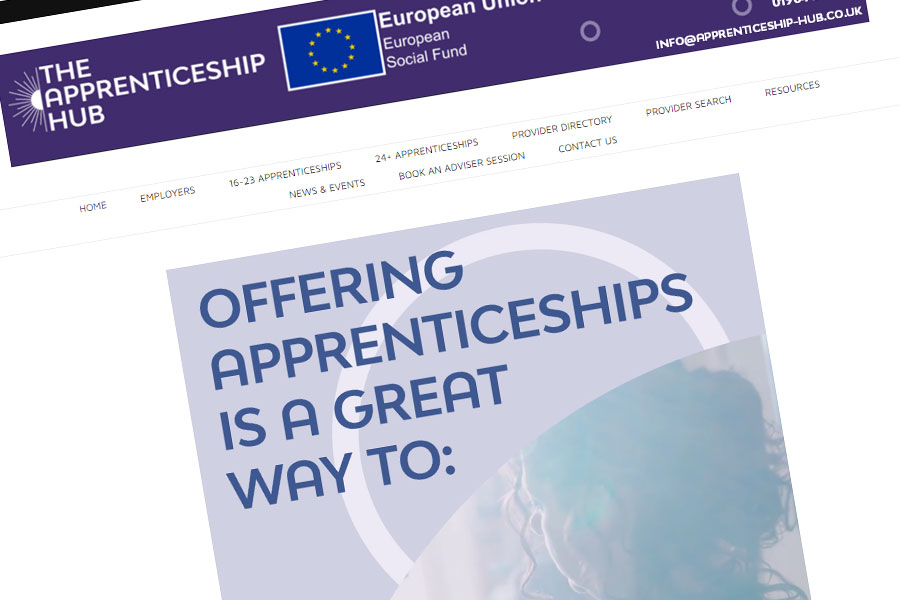 The Apprenticeship Hub offers free and impartial apprenticeship advice to Small and Medium Enterprises (SMEs) based across York, North Yorkshire and East Riding. Its team…

The Education, Skills and Funding Agency (ESFA) has appointed our very own Fiona Gamwell to the Apprenticeship Ambassador Network. Fiona, who is well known to…

Hudson Contract is using some of its apprenticeship levy to help Harrison and Matthew take their first steps on the construction career ladder. Fiona Gamwell,…